Comic Books and Me

When I was a boy, I loved comic books. Comics were one of the major reasons that I pursued art as my career. My interest in comics began when I was seven years old and was directly connected to my first love- the Chicago Bears!


At that time, my family lived in the Chicago suburb of Addison, Illinois. The Chicago Bears weren't very good in those days, but they did have the best player in the National Football League... the legendary linebacker, Dick Butkus! My brother and I had Dick Butkus football cards, jerseys, and a huge Dick Butkus poster adorning a wall of our bedroom. However, despite living near Chicago, we had never been to an actual Chicago Bears game and had only seen Butkus on T.V. That changed when we visited my uncle in Atlanta, Georgia in November of 1970. The Bears were playing the Atlanta Falcons during our visit and our uncle got us tickets for the game- we would get to see Dick Butkus play in real life! 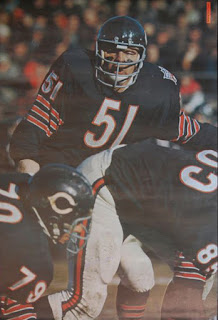 When we went to the game, the cover of the program featured a group of superheroes and the headline, "Beware the Linebacker". 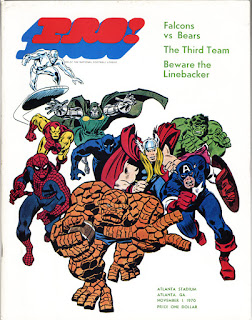 In a feature inside, the program compared Marvel superheroes to NFL linebackers of that time. Since Dick Butkus was the greatest linebacker ever, I wondered who he would be compared to. As I found the page where Butkus was featured, I saw a drawing of a big, green monster mirroring the pose of a photo of Butkus. I instantly became captivated by the depiction of this green behemoth, The Incredible Hulk! 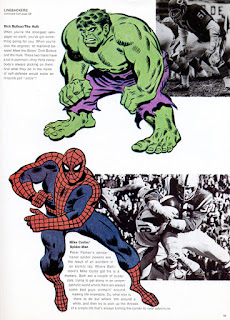 My beloved Bears won the game (a rare win in those days), and I got an added bonus- my introduction to the Marvel universe. When I got home from the game, I repeatedly tried to copy the Hulk drawing, failing miserably at every attempt. The Hulk illustration was done by an artist named John Buscema and his incredible skill was way beyond my 7 year old capabilities. My mother, who is very talented, tried her hand at copying the drawing and did what I thought was an amazing job. Incidentally, John Buscema and his brother Sal were two of Marvel Comics' most talented artists and helped create the marvel universe... both would have a major impact on me for many years to come as the two most influential artists of my childhood.

A few months later (in February of 1971), I was home sick from school with a cold. My mother went out to get me some medicine, and remembering the Hulk drawing, she also picked up a copy of the Incredible HULK #139... my first comic book! That comic made me feel much better than the medicine ever did and began my childhood obsession with comic books and drawing. 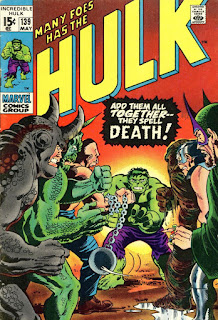 I just loved the Hulk and his adventures. I also discovered a new artist, Herb Trimpe (the artist that drew Hulk comic books), and I marveled at his powerful perspectives and visual storytelling. I tried to copy his drawings, but similar to my earlier attempt at copying John Buscema's Hulk, I failed miserably. However, this time I didn't get frustrated. Instead, I kept trying. And trying. And trying. Each month I bought a new Hulk comic book, and each month the cycle continued. I would try to copy the drawings contained within those magical newsprint pages and I would always fail. However, my skills slowly developed with the constant practice, and fewer drawings wound up in my garbage can. I eventually even created my own superheroes and told their stories through my art. Comics taught me about drawing, anatomy, perspective, composition and telling a story with pictures. But most importantly, those experiences fostered my love of art and shaped the future direction of my life. My work still reflects the things that comics taught me all those years ago. 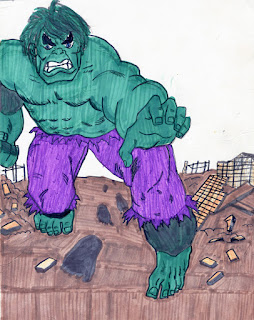 My copied drawing of the Hulk at 10 years old. 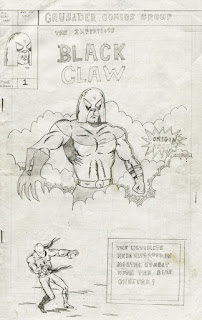 The Black Claw, a comic I created at 12 years old.

Epilogue: Since comics were at the very roots of my artistic career, I wanted the walls of my studio to reflect their importance to me . I have been lucky to find some of the actual vintage original art that inspired me throughout my childhood including the drawing that began my journey. Here are a couple of vintage original drawings that surround me while I work: 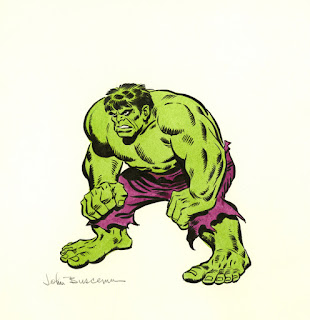 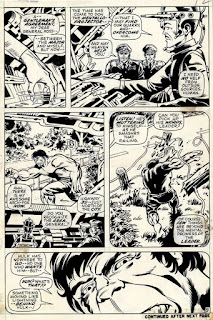