FOSSIL was inspired by the fond childhood memory of discovering fossils with my brothers in our backyard creek in Roanoke, Virginia in 1970. I wanted to replicate the thrill of our fossil discoveries for young readers and use it as the catalyst for a visual adventure. Most of my books begin this way- - thinking of an interesting subject and then using it as a topic for a story. 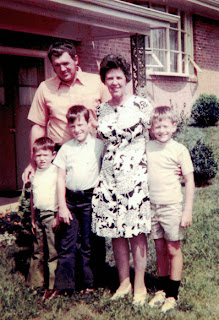 My father, grandmother, and the fossil hunters in Virginia.

After I settle on a story idea, I draw rough doodles (about two and a half inches in length) of random scenes from the story. Drawing the entire story in sequence can be monotonous, so I prefer to begin by freely experimenting with different key scenes. This keeps my focus on designing interesting images that will serve as the cornerstones of my story.

I do these sketches extremely fast and cartoony, essentially just playing and having fun. By keeping them quick, the ideas and possibilities flow and aren't constricted by editing ideas or rendering details. I am primarily concerned with the vantage point and how I might use the space. I draw a stack of rough possibilities and then clean up the ones I like best. Some of my initial sketches for  FOSSIL are shown below.

I originally experimented with having this book oriented vertically as I did in another book, Building With Dad, but my editor, Margery Cuyler, suggested keeping the format horizontal. This would make it more consistent with CHALK, the first book in the wordless trilogy of imagination-based adventures. Margery always makes great points and is a wonderful resource throughout my creative process. 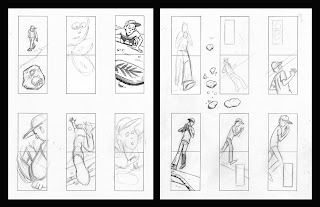 When designing the story,  I try to create a pattern of page layouts so the story flows evenly. I love the visual impact of large spread illustrations, but I also use spreads with inset boxes as a tool to provide more information and adjust the pace of the story. The placement of the boxes throughout the story establishes the pattern. The trickiest part of the book’s design is creating a pattern that corresponds to the pace and action of the story.

In FOSSIL, the pattern consisted of 2 full spreads followed by 2 spreads with inset boxes. I alternated a spread with three additional small boxes and a spread with one additional large box, reversing the order each time. Because pages 4-5 begin the story and establish the setting, I placed the three inset boxes on the right side instead of the left (a subtle but necessary shift in the pattern). It took several days to figure out a pattern that would work best. This pattern allows the key moments to be emphasized with the largest spreads and the inset boxes serve to advance the story and provide clarity. 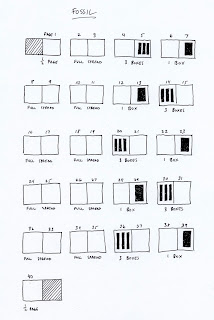 Then I cut out my sketches and arrange them in sequence following the pattern. At this editing stage, I function like a movie director, visually telling the story in the most clear and interesting way possible. I constantly refine, freely adding and subtracting sketches to make the story more cohesive. I try to vary the size, scale and vantage points so that every page is completely different while clearly advancing the story. 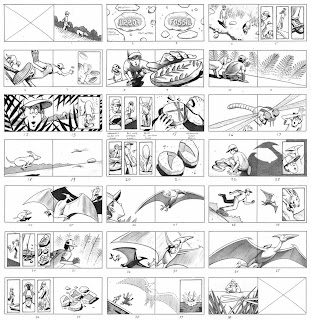 Now I'll focus on the creative process showing the development of one of the illustrations from FOSSIL. The thumbnail above was for pages 8 and 9 and was also selected as the cover. This scene utilizes an extremely low vantage point to prominently show the fossil. Even more importantly, it emphasizes the shocked expression of the boy and his dog upon making their discovery.

After deciding on the content of my illustration, the next step is to bring my idea to life. Because I work realistically, I use photographs as visual reference for my paintings. This requires carefully selecting models, finding locations, and building props. For FOSSIL, I shot over ten thousand reference photographs. The central characters in FOSSIL are a boy and his dog, and I wanted them visually connected by their long hair. The boy I selected played football with my youngest son- his nickname was “Hollywood” because of his flowing locks. I spotted the English springer spaniel while taking a walk with my wife, and instantly fell in love with her long curls. For the characters to appear natural, it is very important to coach my models in their facial expressions and body language. Getting the dog to do what I wanted was more difficult. However, after I discovered her love for Dunkin’ Donut Munchkins, some well-placed donuts coaxed her into the positions I needed. I always have a good light source on my subjects to define their form and texture. 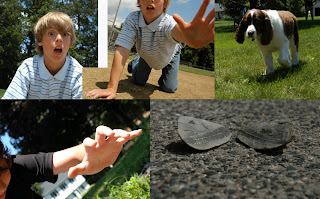 Looking at the best parts of several reference photos and freely making adjustments and additions, I draw out the illustration. I tried to make the dog look apprehensive, a warning of things to come. I use graphite for most of the drawing, but used colored pencils on the skin tone shadows to keep the color rich. After the drawing is complete, I spray it with fixative so the graphite doesn’t smudge. 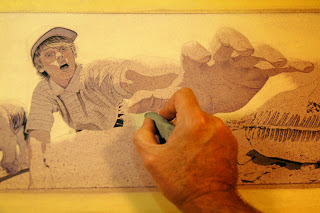 This leaves an under painting of yellow and purple that establishes the areas of light and shadow. 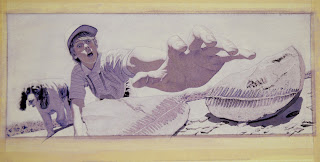 I always paint the background elements first, so I mix 5 different shades of brown that will be the ground color. I also mix the middle value into pumice gel medium that contains small pieces of real volcanic rock. 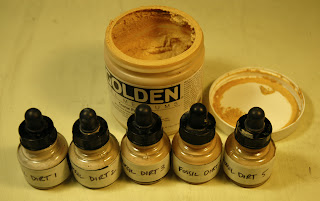 Next, I mask off everything except the ground using liquid frisket. Then I apply the medium and gesso, so the foreground has actual rocks mixed in with the texture. Using a sea sponge, I create a ground texture on top by overlapping the various values of brown. 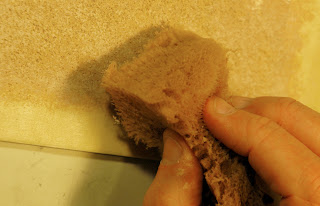 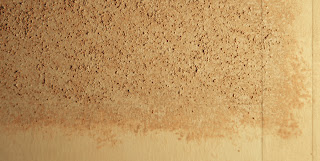 When I peel off the frisket, only the unprotected areas will have the rock texture. While this three dimensional aspect of my painting can't be reproduced in the printing process, the way paint reacts to the texture does, making the ground feel bumpier and more realistic.

Continuing to develop the background of the painting first, I mask off everything except the sky using adhesive frisket. Then I paint the sky using an airbrush. While I don’t like airbrushes, I sometimes use them to apply large flat areas of color. However, everything in my studio also gets a light blue coating of dust that takes me weeks to clean up. Since I'd rather be painting than cleaning, I keep airbrushing to a minimum. When I peel off the frisket, the sky and ground are complete.

Then I paint in all the foreground areas using acrylic paint. This is the most painstaking part of the process, but the color begins to breathe life into the painting.

And finally, I render everything again with colored pencils, bringing out all the details, highlights, and textures. The entire process for this illustration took over 125 hours.

After my artwork is completed, Two Lions Art Director, Katrina Damkoehler, made digital scans of all the paintings to use on her cover design. I love how she incorporated elements from numerous illustrations to create a representative book jacket. Katrina also created a beautifully textured FOSSIL logo that would serve as the centerpiece of the cover.

If you enjoyed seeing this sequence, the creative process for another FOSSIL illustration can be seen on Alyson Beecher's Kit Lit Frenzy blog.

Posted by Bill Thomson at 2:10 PM No comments: