The Best Art Piece of My Life

I always tell my illustration students to try to make every assignment be "the best art piece of your life". I'm sure that my constant prodding sounds a bit like a broken record at times, but that is how I always approach my own work. For me, selecting my best artistic piece is an easy choice. I consider a brochure that I created with my wife, Diann, to be my very best work. Although my creativity, concept and finished technique have been better on hundreds of my other paintings, I'll never illustrate anything that means as much to me.

To understand why, I have to provide some background information first. Our eldest son, Billy, was born in 1994 with a cleft lip and palette. There was no indication of a birth defect prior to his birth, so this came as a complete shock to Diann and me. A cleft lip and palette is essentially an opening extending through the lip and roof of the mouth that failed to fuse during development of the fetus. The physical appearance of babies with this birth defect is somewhat startlingly.

Since we had no prior knowledge or family history of this condition, Diann and I were extremely concerned for our son. We learned that the lip and palette could be "corrected" through surgery and we were given a stack of medical literature. Although we had been extremely careful about every aspect of Diann's pregnancy, our initial reaction was to think that this was a result of something we did wrong and to wonder how this could have happened to us and our baby. However, we quickly realized that this was not at all about us, but rather all about Billy. God made us his parents for a reason. To be good parents to him, we would have to accept him (and his condition) just as he was and put all of our focus on helping him.

That night, I went home from the hospital and read everything the doctors gave us several times. While the information educated me to the medical facts of my son's condition, it did little to ease my concerns about his future. In the following days and weeks, we met with doctors from the University of Connecticut Craniofacial Team that would perform Billy's surgeries. We also met parents of other children born with a cleft lip and palette. We learned that Billy would need two surgeries in the first year of his life- one at three months to close his lip and another later that year to repair his palette. At eight years of age, he would also need a bone graft to reconstruct his gum line. While understanding the surgical procedures was helpful, hearing from other parents with children that had undergone similar surgeries truly gave us hope and comfort.

From the beginning, our experience with a newborn was much different that what we had prepared for. Since babies with a cleft can't form a seal to suck on a bottle, we had to learn how to feed Billy with special bottles. He had to learn to gulp the formula as we squeezed it out, often gagging in the process. After significant practice and patience, Billy was eating well and gaining weight. When we took him out in public, people would sometimes gawk or make inconsiderate remarks about his appearance. I have always believed that God doesn't give us more than we can handle, so we just took everything one day at a time. Initially, I couldn't wait for Billy to have the surgery, but by the time it was scheduled, I loved his little face just the way it was. I really hated that he would have to go through the ordeal of surgery at such a young age. The first year of Billy's life was a whirlwind of doctors visits and surgeries.

A year later, Billy had successfully undergone both surgeries and was doing great. We had been extremely fortunate to have wonderful craniofacial doctors working in our area and they did a tremendous job. After our life had shifted to a "more typical" parental experience, Diann and I began to wonder what we could do to help other families with babies born with clefts. We remembered that first day and how scared we were. We also remembered the informative materials that the hospital had given us immediately after Billy's birth. Since Diann is a graphic designer and I am an illustrator, we decided to produce a brochure for parents.

Rather than just providing medical facts, this brochure would be written from a parent's perspective. Much like the encouragement that other parents had given us, we hoped that telling Billy's story could provide hope and reassurance to families with cleft palette babies. Diann and I wrote it together and I created illustrations to accompany the text. Then Diann did the design work and her printing friends were kind enough to donate the printing costs. We gave the brochures to the Connecticut Children's Medical Center, and for the next ten years, the brochures were distributed to families of newborn babies born with a cleft. In the years that followed, numerous families contacted us and told us that the brochure helped them through a difficult time, so I consider this to be the most meaningful thing my wife and I have ever done with our talents.

Life often presents us with unexpected challenges, and we should place our trust in God to give us strength and comfort through difficult times. If you know anyone with a baby that was born with a cleft palette, please feel free to share this brochure with them. 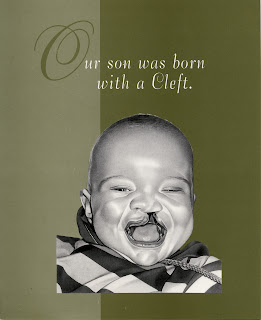 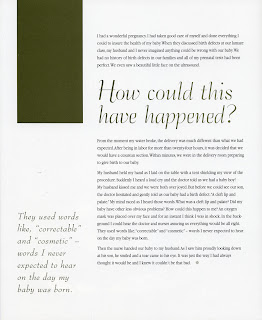 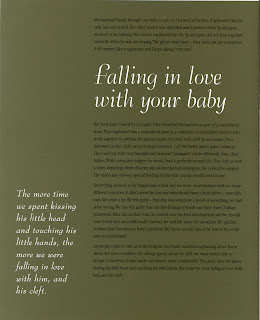 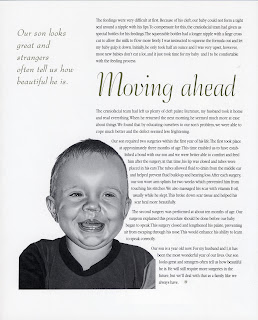 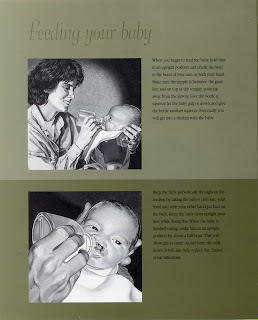