I loved being a kid. Every day was a new adventure with endless possibilities for exploration, discovery and imagination. Whether I was catching things in a nearby pond, pretending to be my favorite Chicago Bear football player or exploring new places on my bike, every single day was fun. Playing sports and doing anything that involved being outside were my preferred activities, but I also loved reading comic books and drawing. I spent endless hours creating my own comic characters and then drawing stories chronicling their epic adventures. I had an absolutely wonderful childhood and really loved those enchanted years. Because of this, I guess I have always enjoyed depicting children in my art and celebrating the magic of childhood. 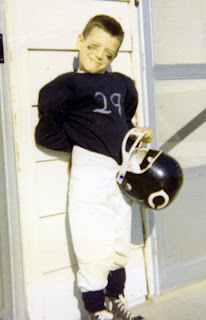 My illustration career began as a high school student when I created editorial illustrations for a local newspaper during my junior and senior years. Even then, I would often use children to communicate the message or story. I also had a pretty spiffy signature back in those early days. 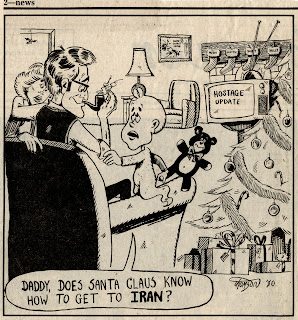 During my sophomore year at Syracuse University in 1983, I first explored childhood in a more imaginative way through my art. My instructor, Murray Tinkelman, gave an assignment called "Art On Art"- to make a piece of art about art. For all of my student assignments, I tried to choose subjects that I enjoyed drawing and this was no different. I created a pen and ink drawing of a child accidentally causing an artistic miracle in a museum... my first "miracles of youth" illustration.  This piece was selected for inclusion in the prestigious Society of Illustrators Student Competition later that year, and was the first significant recognition of my work. 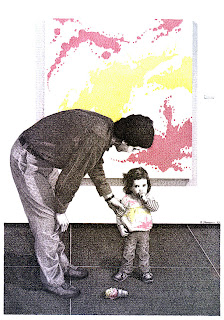 Looking back at this now, it is amazing how many aspects of this illustration would resurface many years later in my children's book work. The monochromatic palate with color accents would be revisited in my Karate Hour and Baseball Hour books, while my fascination with the miracles of youth would repeatedly appear in my work.
I did several other child-oriented illustrations in college as well, and really enjoyed creating narrative illustrations that told a story. This illustration paid tribute to the "Creature Feature" monster movies that I loved to watch when I was a boy. 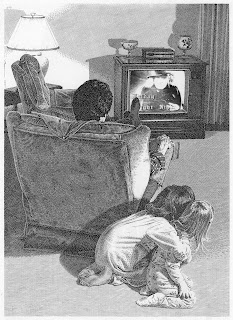 As I began my professional career, I pursued work in the advertising market because it paid enough to allow me to work as a full-time illustrator. For nearly two decades, I was primarily focused on satisfying client's illustration needs for advertisements, brochures, billboards and countless other corporate projects. However, many of my self-promotional pieces were still centered around celebrating childhood. My cousin, Amanda, had posed for his pen and ink illustration that I used on a summertime mailer. 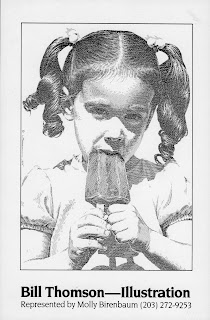 My favorite illustration jobs, like this McCall's Magazine illustration depicting a child's anticipation of Santa's visit, centered around kids and storytelling. 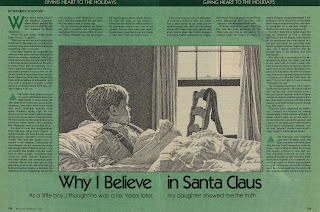 While some assignments like this illustration for the NFL's Jacksonville Jaguars were a great deal of fun and used for unusual things like media guide covers, stadium banners and even on trucks... 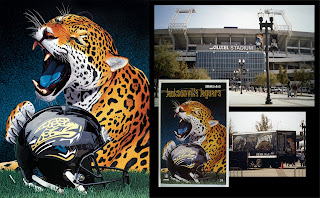 ... the majority of my work dealt with much less interesting and more direct images like this ad for Honeywell Bull illustrating construction equipment. 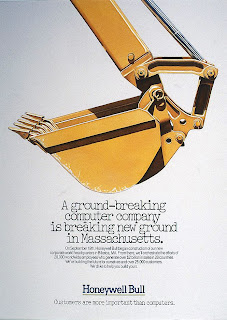 This poster illustration for the Ocean Spray's Cape Cod Summer Baseball League Championships taught me how to paint baseball laces- albeit in a funky Cape Cod-shaped way. Besides providing a steady income, all of this would be preparation for things to come later. 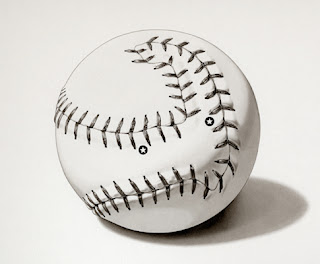 In 2000, I created a self-promotional piece called Watercolors that revisited my old "miracles of youth" theme and changed the direction of my work and career. At this point, I had become a father and began to re-explore childhood by seeing the world through my children's eyes. After creating countless advertising illustrations that were somewhat restricted by client needs, painting an image that told a story was an absolute joy. I realized that I was at a point in my career where I needed to pursue the kind of work that most interested me. My artistic focus shifted squarely to creating more narrative paintings with the eventual goal of illustrating children's books. This piece was also my first work accepted into the highly prestigious Society of Illustrators and Communication Arts annual illustration competitions and was later used on a calendar. Once again, following my personal artistic interests had brought national recognition to my work. 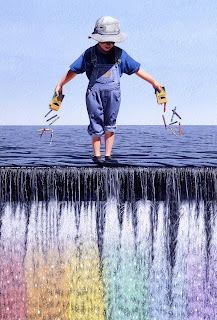 After that, I began pursuing child-oriented illustration assignments that offered more creative freedom, but little or no money. I donated this holiday card illustration for the Connecticut Children's Medical Center's annual fundraiser. 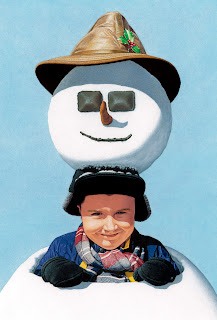 Even this somber illustration on the horrific events of September Eleventh for Quarencia Magazine portrayed a young angel as its subject. 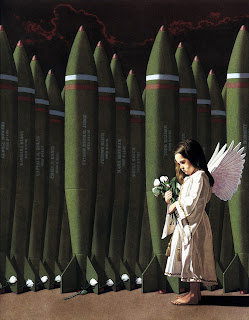 And this 2002 brochure for the CCMC Craniofacial Team allowed me to further explore my favorite "miracles of youth" theme. 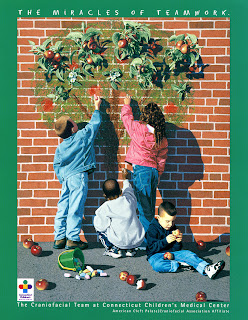 I also continued to create child-oriented promotional pieces like this image of a bully that I called, "Listen, Buster..." 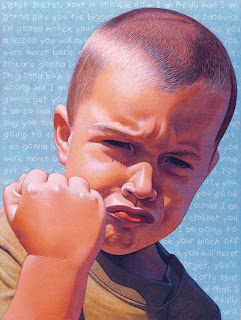 In 2003, "Listen, Buster..." was seen by Marshall Cavendish art director Anahid Hamparian who was looking for an artist to illustrate a karate manuscript. Anahid offered me the opportunity to illustrate my first children's book, Karate Hour (written by Carol Nevius), and my career had completed its turn. In Karate Hour, I depicted the events of a typical a karate class, but enhanced them with dynamic comic book perspectives that I enjoyed so much as a boy. While illustrating an entire children's book was much more work than I had ever anticipated, I also found it to be the most enjoyable and satisfying experience of my professional career! I relished the creative freedom that children's books offered, but even more importantly, the opportunity to contribute in some small way to the childhood of young readers. Illustrating books for children was both an honor and a privilege, and I believed this was the best possible use of my talent and the most important work of my career. 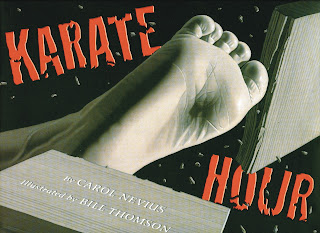 I also enjoyed working with wonderful people like my editor, Margery Cuyler, and my art director, Anahid Hamparian. I quickly realized that producing a children's book is a true labor of love and a collaborative team effort. I was lucky to be working with talented people that believed in me, and for an outstanding publisher dedicated to producing children's books of the highest quality. My books also became a family affair. My wife and sons modeled for some of my illustrations, and even more, supported my dream by giving me the time to do my best work. 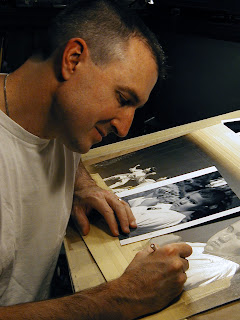 Luckily, Karate Hour received favorable reviews and I was offered a second Carol Nevius manuscript for a book called Building With Dad. This book somewhat reminded me of that old Honeywell Bull ad, but also included a wonderful father/son story. In my role as a children's book illustrator, I want to create books that make imaginary stories seem completely believable and real to young readers. I also want to present them with interesting subjects shown from perspectives that they don't typically see. With that in mind, I designed Building With Dad so it would open from the top creating tall, vertical illustrations. This would help emphasize the perspective and the monumental stature of construction equipment from a child's point of view. Since children normally see construction projects from a "kid safe distance", I wanted this book to allow them to get much closer than they safely could in the real world. 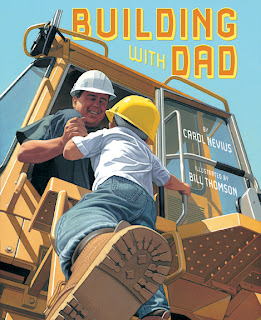 As much as I enjoyed illustrating Karate Hour and Building With Dad, I was also still interested in further exploring my "miracles of youth" theme. When preparing for an exhibition at the Society of Illustrators Member's Gallery in 2005, I remembered a rejected thumbnail sketch idea from the earlier Craniofacial Team brochure that I had always been fascinated with... a group of children drawing butterflies that were coming to life. I had loved that idea, but it wasn't quite right for the earlier brochure. However, the exhibition announcement provided the perfect opportunity to finally pursue that idea. 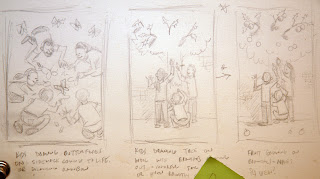 During the two weeks that I spent painting it, I began to imagine an entire story based on the magic chalk scene that would later become my first solo book, CHALK. I envisioned a group of children finding magical chalk and exploring its power. At first, the chalk would be used for a childhood necessity like bringing the sun out on a rainy day so they could play outside. Then they would use it to enhance their world by creating the field of beautiful butterflies. Then one of them would abuse the power and draw something that presented a real danger to them. In the end, the children's creativity would save them and solve the problem they had created. 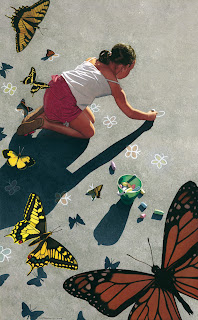 I mentioned my CHALK idea to Margery while I was illustrating Baseball Hour, and she seemed very enthusiastic about it. However, this left me quite torn. On one hand, I was having a blast illustrating Baseball Hour, a book that I absolutely loved. On the other hand, I couldn't wait to finish it because I was so excited about my CHALK idea. Let me tell you, it is tough to meticulously paint every detail on dozens of baseballs and cleats when your dream job is on the doorstep. But my philosophy has always been to make every illustration the best work I have ever done, and I put everything I had into Baseball Hour. I felt this book set a new personal artistic standard for me, and I would really have to work hard to equal or surpass it with CHALK. 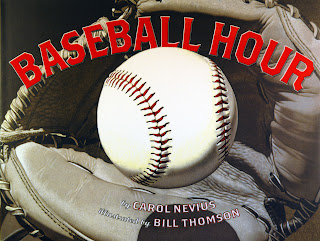 In the summer of 2007, I finally began working on CHALK. This book consumed my world for the next year and a half- I never work harder or had more fun doing anything in my entire life. In many ways, CHALK took a lifetime to develop and was the realization of a personal dream, so I was committed to making it better than anything I had ever done before. As I worked on the paintings, I often thought about the children that would read this book. I wanted CHALK to have value to them beyond entertainment, and I envisioned it as a teaching tool that could encourage reading and stimulate imaginations as a prompt for writing or artistic activities. When I was exhausted and working through the entire night (and there were many, many of them), those thoughts would inspire me to work even harder. When I finally finished the artwork in February of 2009, I felt that I had accomplished my goal and this was truly the best work of my life. I was especially proud to dedicate CHALK to my sons, Billy, Nik and Ethan, who reminded me of the magic of childhood and taught me to follow my dreams. 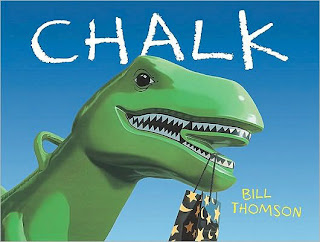 Posted by Bill Thomson at 2:14 PM No comments: Links to this post